If you like that grim, dark and eerie atmosphere that expresses our internal battles, then Unborn Generation is definitely your cup of tea. Some weeks ago the band released their first single “Shadow” of their upcoming album  “Vøid”, which will be released through Inverse Records on 15 June 2018.
But before the new album is released to the masses, we had the chance catch the band and have a chat with them about all things related to their new album. 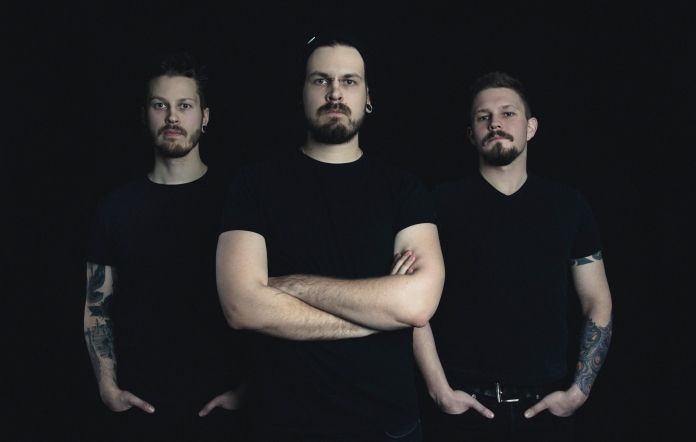 Hi guys! First of all, thanks for making the time for this interview. Now, Unborn Generation might be unfamiliar to people who are not into the local band scene in Finland. For those, who don’t know of you yet, can you give a short background of your band?
Eetu: The band was founded 2002 in Pieksämäki by me and my brother Herkko Huttunen and Juho-Pekka Airaksinen. We have been based in Jyväskylä for several years now.
We really didn’t know Juho-Pekka that well before we started this band but we  came along very well right from the first rehearsal we had. We knew him from school. Arto Kettunen joined the band in 2012. We had some mutual friends with him and we bumped into each other in the nightlife of Jyväskylä. I also played in an black metal band short time with Arto before he joined us. I would say our music is violent dark grindcore with some scent of crust.
You say you think your music is violent dark grindcore, with some scent of crust. Even though that’s very specific, can you give us a bit more insight of what we can expect when we listen to Unborn Generation’s music?
Herkko: The sound is basically our own, but there are a lot of influences from old Swedish death metal tone. Dirty and raw Grind ’n’ Roll.
Eetu: We try to be as loud as we can.
Arto: I think I once described the bass sound as “the flapping of a rubber boot when beating it to a crack-whores bum”. Besides the bass, I think we have an underlying, even atmospheric (drone) tone in the mix of d-beat and huge guitar walls. We like the overall dirty vibe, without not much polishing.
That’s true, “V∅id” has a very dirty and raw sound to it. The first single you released was “Shadow”. What can you tell us about the single, how have the reactions been so far?
Arto: The single sets the tone quite fittingly for the whole album. Jungian themes are present in many of the other songs as well. Reactions have been good so far, I think we managed to capture some real emotion in this piece.
“Shadow” was the first single of your upcoming album “V∅id”, what can you tell us about the album?
Eetu: This album will have more shades than the previous ones and I would say it is more darker sounding. It’s not all about the fast  tempos on this album. I think it had a major impact on our sound when our lead singer changed.
Arto: Yeah, like Eetu said, the new album is heavier, but not faster. It’s darker yet more powerful in my opinion. Herkko’s singing took some time to get used to, but then it “clicked” and I really do like the sound of our “new” singer.
Herkko: Yes, very very dark. Like the night. Night is a very dark time for me.
Let’s talk a little bit more about the other songs on the album. Can you pick out some specific ones that you personally really like and tell us about them?
Herkko: I like “Shadow” and “Ritual” which are the first singles to be released. We really succeeded in entwining the album’s theme into these two, in music and lyrics. But there are also two other songs “King” and “Harbinger” which I’m quite excited about. Those two songs present a kind of a new style of Unborn Generation.
Arto: I also cherish the singles. “Ritual” has some nice Lovecraftian vibes (though not the only song on the album that does…). I enjoy “Void” in its excruciating weight. “Diehard” is my favorite one to play definitely, I think it will be a killer live song.

When it comes down to the lyrics, is there some kind of red thread that is connecting all of the songs together?
Arto: I write the lyrics and arrange the vocals. Before we even started really composing anything for the new release, we had an idea of a kind of a concept album. Previous albums have been tensely themed with societal and somewhat political pondering, so this time we thought about something else – hence an album with these abyssal stories. Lyrical themes come from personal experience accompanied with my interests of philosophy, religion, mythology and psychology.
So what about the creative process of “V∅id”?

Eetu: Well mostly Herkko writes all the songs and then he sends us the demos for listening. Then me and Arto give our little spices to the songs. This is pretty much how it always goes. I think Herkko writes the songs usually in a very short period of time. When the songs start to come there is no holding back. I think the recording part went quite easily this time because the tempos were not that bad and we had rehearsed properly.
Herkko: Like Eetu said, when writing season is on, I’m unstoppable. If the mood is right then songwriting is quite painless for me. The recording of this album went quite smoothly. Drums took about couple of days, guitars and bass one day each. Vocal recording took longer this time because I was searching the right tone. This is our first album with me as the lead singer.
When I looked at all the visual material of Unborn Generation, it strikes me that it seems like there has been someone thinking a lot about it. The artwork looks very  much in line with the dirty, grim atmosphere that the album radiates. What can you tell us about the artwork?
Eetu: Herkko is also responsible for all the visual arts. I don’t know maybe he is a wizard of some sort. He just has the big picture figured out between the music and all the visuals.
Herkko: When I heard the first songs with vocals, I started to get some ideas for the visuals. The album is quite dark and grievous so the artwork has to reflect that. It’s very important for me that everything is in line – music, photos, videos and artwork. But it is quite straightforward to keep everything in line because we do those things with our own group and I don’t have explain my ideas for someone else. Live shows are perhaps not so visual because we don’t (yet) have the resources to create my vision. Background videos would be cool, maybe someday when we play bigger venues. (laughs) During a show we trust in the power of music.
Your band is based in Jyväskylä, I’ve personally never been there. What’s the metal scene like in there?
Arto: Jyväskylä is swarming with metal bands and great musicians. It’s an awesome city to do music in. That is the reason I actually moved to Jyväskylä many years ago.
Eetu: In Jyväskylä we also have this amazing venue Tanssisali Lutakko where we have our rehearsal place. That building is full of good vibes which gives us inspiration.
Have you had any challenges to keep you from growing forward, how did you overcome them?
Eetu: Well I think the latest challenge obviously was Juho-Pekka leaving the band. We have been together as a band for many years so it was no easy thing when he left. To process that thing during writing new stuff was a hard bit. But the whole thing made us reborn and we have this new flame inside us now.
So, basically you just told me that like a phoenix, you rose from the ashes, now on the path towards success. Can you shed a bit more light on what direction you’d like to go to with the band?
Eetu: We would definitely want to play also outside Finland. And we are planning to play shows around Finland in autumn.
Thank you guys so much for the discussion! Before we wrap this up though, do you have some last words for our readers?
Eetu: Check out the new album when it comes out. Get yours from Levykauppa Äx. Support loud music. Peace.
Herkko: Yeah and come to see our live shows.
Arto: We are flies, trapped in a bottle of shadows. See us live!

Interview with messier — “There’s only three of us, so we have to make it count and get the sound as big as we...

Interview with The Circle — “How every human reacts to setbacks in life.”

Interview with Scar of the Sun — “I was angry, I was really angry, and that’s why my vocals came out like that.”

Interview with messier — “There’s only three of us, so we...

Interview with The Circle — “How every human reacts to setbacks...

ABOUT US
Tuonela Magazine is your number one source for heavy metal and rock music in Finland.
Contact us: tuonelamagazine@gmail.com
FOLLOW US
© 2021 Tuonela Magazine. All rights reserved.