Around here Santa Cruz, the four-piece rock and roll band from Helsinki, for sure doesn’t need any introduction anymore. After releasing their debut album Screaming for Adrenaline in 2013, the road has been a very interesting one for the band. Now 4 years later, they’re about to release their third studio album in September.
We had the chance to talk to Johnny and Middy after their show in RockFest at Vantaa, to see what’s up, we had a talk about their new single, the upcoming album, consumption of alcoholic beverages and yes, hair. 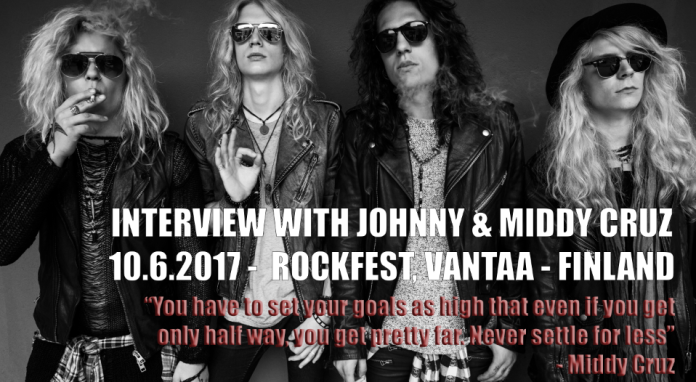 First of all thank you so much for making the time to have this interview with us. Today was your first festival of the summer.

Johnny: Yes, our first festival!
How did you feel about today? We noticed it was pretty crowded, even though you played quite early and everyone must have been tired from the festival day yesterday, we heard you had an afterparty yesterday, but we didn’t manage to go ourselves, instead we enjoyed your gig today. How are you feeling about the gig? How did it go?
Johnny: Pretty fucking good, ‘cause these were the first two shows we have had in half ayear, so it was very fun to be on stage again, ‘cause that’s what we love.
Middy: It’s nice to be back and to know the fact that we have these summer festivals coming up and we’re about to release our new album soon and tour our asses off and just to know we’re gonna be away from home for a while… It’s great.
Especially with this kind of weather in Helsinki, even though today it’s the first summer day.
Johnny: First summer day, right!
Middy: First and the last, right? (laughter). We’re enjoying our whole summer right now.
You presented your new single, how did you feel that the people reacted on it?
Johnny: They loved it. In fact the new single was the biggest cheers we got for the whole show.

Maybe it’s just a hunch, but it seemed you were a bit nervous when you started playing the song?
Johnny: It was the second time we played that song. The other songs we have played like 1500 times live. So in that way it was different, but few shows and it’s gonna be the same.
We saw already many people wearing the River Phoenix T-shirt.
Middy: Promotion has done a good job (laughter).
We were thinking about the story behind the song. You are now more or less the same age when River Phoenix died. Why did you write a song about him? Is there a special meaning to it?
Johnny: He was kind of the metaphor for the whole album. We have been touring for two and a half years and it felt like forever. Now we have to rise again from the ashes like a phoenix and then there’s the fact that River Phoenix became a legend after he died. There’s like three different meanings connected to it.

Johnny: I don’t use hairspray.
No way, your hair always looks the same. What conditioner do you use then? It must be hairspray?
Middy: Kenneth Murphy! Use that!
Johnny: But yeah, no hairspray.
Middy: It’s called sweat, what you’re thinking about.
Johnny: Yeah, sweat.
Middy: You have that when you work out or when you play and jump on stage (laughter).
But then there must be some other secret to it?

Middy: Oh yeah, that is called dirt.
Johnny: It probably has this effect after two shows, when I didn’t wash my hair. But no, no hairspray. Fuck no!
Middy: Yeah, sorry to break it to you this way, we don’t use hairspray.
Well you know, Santa Cruz not using any is of course also news.
Middy: We really care about our environment, you know.
Johnny: What the fuck? (laughter)
You played your first festival and you still have some shows ahead. What are your other plans for summer?
Johnny: Vacay.
Middy: Go see other bands…
Do you have favorite bands coming?
Middy: Guns N Roses.
Johnny: Yeah, Guns N Roses!
They are playing same day as Tuska.
Johnny: Yeah, but we are not gonna be at Tuska. Because well… Guns N Roses in Finland.
There is some people who don’t really believe that they are actually coming to Finland. I remember one time I had to wait 2 hours before they came to the stage, the rumor was that they didn’t want to go from backstage to mainstage by foot and a whole bunch of other stuff needed to be organized at the spot.
Johnny: I think they’re pretty much better right now in that way, they don’t start their shows that late anymore, there hasn’t been any news about that.
Middy: What happened? Is it the same band anymore? Actors maybe? Well anyway, I also want to really see Marilyn Manson. He’s coming to Qstock. We’re actually playing on the same day.
Sounds like you will have a blast! We hope you will have a nice break and are looking forward to be able to listen to the album in September. Thank you so much for your time!

Editor’s note: Some final statistics! We counted out that Santa Cruz has about 37 times fuck/fucking/motherfucking/… in their total repertoire. Which makes the total balance a bit more than well… 5 times. In this interview we have written the word down in various forms about 17 times.