Now that the open air festival season is over and the leaves already start falling on the ground, the club season of the fall has officially begun. First one on our plate: Turmion Kätilöt. The Finnish industrial titans took a stop in The Circus on 15 September 2017.

The evening began with support act Stereo Terror DJs: two DJs and a drummer. I am personally not very familiar with DJs and that sort of scene. I can only rely on what I experienced as a witness of the party that was going on. The venue was not that crowded, but later on started to get more and more packed. The DJ set seemed to be a combination of industrial metal, EBM, eurodance etc, with bands like Combichrist, Marilyn Manson, Scooter and the Prodigy. While some still had to get into the dancing vibe, others were throwing themselves to the dance floor. The party exploded with “Oi Beibi 16” a song most people seemed to know. The act offered the right kind of energy to the audience to warm them up for Turmion Kätilöt and it’s no surprise they were chosen to open up for them.

Combichrist – What the Fuck is Wrong With You

The crowd was warmed up now enough for Turmion Kätilöt to start. Shame on me, I had never seen them live before this and the stories I’ve heard made me very intrigued to go watch the band play. Only one question kept me going: “Are they really as good as everyone says they are?” Question is simple. Yes, they are.

The concert kicked off with “To Be Continued: Act 3”, a good opener, that makes the audience immediately behaving as if they were at a rave party. This basic atmosphere continued right up until the end of the concert. People were singing along as if they would get kicked out of the venue if they wouldn’t. I’ve never seen an audience with such dedication to honoring their favorite band playing live. A great atmosphere to be part of. The setlist was well balanced between new songs and old songs. The grotesque six piece took us from songs like “Sinä Saatana” to “Teurastaja” to “Dance Panique” and went of with a blast of disco beats with “Lataa Ja Varmista”. From beginning to end, everyone was massively enjoying and before you know it the concert was over. The crowd however, seemed to be really satisfied and went home with a smile on their face. Sadly, the concert had to end at some point. But we were treated with 16 songs, quite a lot.

The energy the band performs with is unbelievable and it’s amazing to see how this translates unto the audience. I don’t think I have ever experienced a crowd as excited as the Turmion Kätilöt fans in Finland, which was something really impressive to see. Thus the evening was deemed a successful way to kick off the fall season. 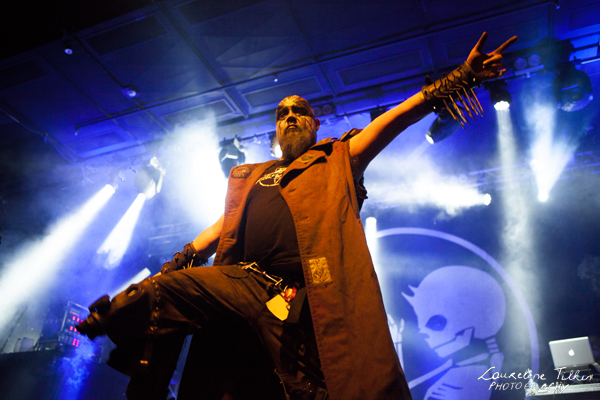 REVIEW: Lost Society – If the Sky Came Down