Metallica recently stopped in Helsinki, to give not one, but two shows at Hartwall Arena. The event however, sold out really fast. No surprise there. Those left without a ticket, didn’t have to hold back on headbanging to their favorite Metallica tracks though, as Hard Rock Cafe organized a Metallica Tribute night on the day in between the concerts. Hundreds of Metallica fans, both attending and not attending the concert, showed up, including me. 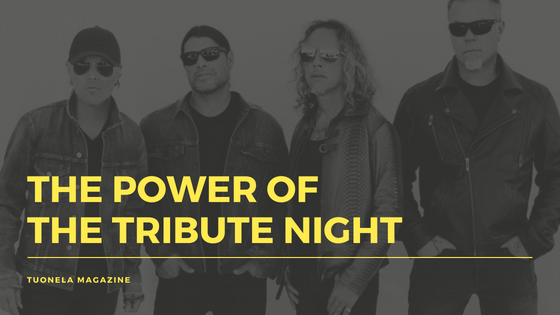 The band playing at the tribute night, consisted out of very known and established musicians: Janne Joutsenniemi (Stone), Kuisma Aalto (Mokoma), Samy Elbanna (Lost Society), Jukka Kröger (HIM), Tommy Tuovinen (Oceanhoarse) and Mikko Herranen. It was no surprise that the music, thus sounded tight.
But why is it that cover bands and tribute nights are really popular? If there is one thing that drives ticket sales is that nostalgia breeds profit. Surely, if one would have a choice in going to a concert of the actual band playing or a tribute night, then yes, Metallica it is. Those who don’t have the option, can gladly feel nostalgic about their fandom and all the classics being played by skillful musicians, with the same amount of energy. After all, these musicians usually also are fans and do everything possible to assure that the band is being honored in the right way.
A tribute night if done right, will eventually give you the same feeling and the same amount of fun for a much cheaper price. At times during the evening, if I would close my eyes and try to forget who is standing in front of me, I did hear Metallica blasting through the monitors.
Is that what I experienced at the Metallica tribute night at Hard Rock Cafe Helsinki? I surely did. The sound was tight, the atmosphere was intense and a lot of fun, the venue was completely filled with an audience dedicated to Metallica and we were presented a set list we could only dream of. The concert even started the same way with the epic “Ecstasy of Gold” of Ennio Morricone. Classics flew around the venue like a moth to a flame, and some nice surprises like for instance “Disposable Heroes”.
Now, the next time you see a tribute night in your town and you’re wondering if you should attend or not, if I were you, I wouldn’t hesitate, it surely is a nice alternative to a regular night out!

10 bands that have been revamped by new vocalists

REVIEW: Lost Society – If the Sky Came Down

Interview with Stratovarius — “This album has more energy and it sounds fresh.”