Imagine living in Switzerland from about 500 B.C. to A.D. 400, where a Celtic tribe named the Helvetians settled in the land of the Alps. These strong cultural roots have been a foundation and inspiration for the folk metal band Eluveitie from Switzerland. And much like their ancestors who lived in a constant disruption of war and glory, Eluveitie has had a turbulent couple of years. 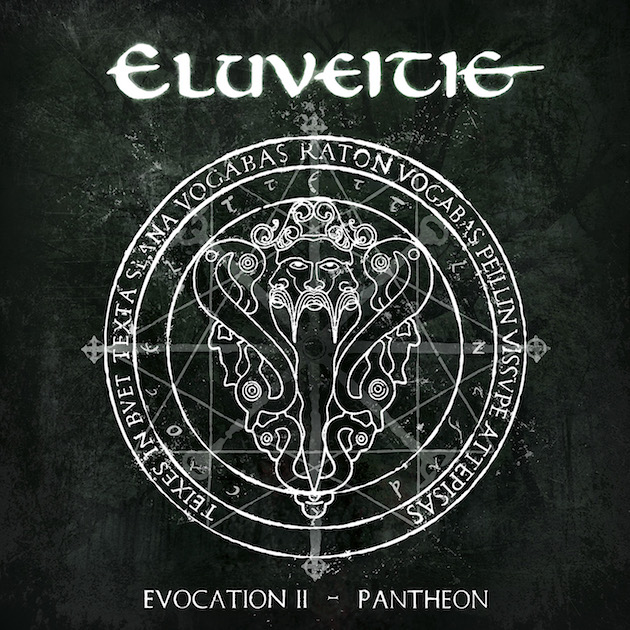 By letting go of drummer Merlin Sutter, the band seemed to have triggered the wind to let the card house cave in and as a reaction beloved vocalist and hurdy-gurdyist Anna Murphy and guitarist Ivo Henzi decided to leave the band as well. The three now formed a new band Cellar Darling, while Eluveitie has replaced them by drummer Alain Ackermann, guitarist Jonas Wolf, hurdy-gurdyist Michalina Malisz and vocalist Fabienne Erni.
But not only the lineup changes have been a challenge for the band as their latest release dates back only from 2014. So it’s been quite a while since any new material has been released. However the band decided to follow up on their acoustic release of 2009 “Evocation I” and have presented us with a completely new acoustic album “Evocation II – Pantheon.”

“Evocation II” takes us for a walk down the past into the mystical world of the Gallic pantheon and bows down to the Celtic Gods after which the song titles are named. That the album works on different levels, each song fitting the God it was made for precisely. The band has worked together with historians and scientists for the Gallic lyrics to be as correct as possible and many songs take a nod to already existing (Celtic) traditional folk melodies, such as for instance “Ev Chistr ’Ta Laou!”, “Scarborough Fair” and “Tri Martolod”. Eluveitie is known for combining folk with melodic death metal by use of several traditional instruments. And it is in this album that they explore the use of these folk instruments even more.

The lack of sneering guitars and distortion, is definitely not a problem for this release. Some of the songs are even heavy without all these metal elements being present and definitely still “Eluveitie” enough to please the average folk metaller. Fast paced songs like “Lvgvs”, “Taranis”, “Nantosvelta” and “Cemvnnos” reflect Eluveitie’s spirit very well. But the slower tracks, for example “Antvmnos” – Eluveitie’s own version of Scarborough Fair – set the most beautiful and serene atmosphere to the album. It’s something you dive into and you get sucked up in. It really feels like you are wandering through the sands of time looking over a river bend through the landscape of the Alps.

The melodies used are always made as if they are theirs and thus the whole album sounds very refreshing, especially combining natural elements such as wind, water to the production. Because of the acoustic setting we get to know the full potential of the new band members on a more deeper and personal level. An example of this is the vocals by Fabienne Erni. Her voice and energy fits the band very well, and is a very good replacement for Anna Murphy. I’m looking forward to see her evolve with the band. I can’t help but wonder why they did not find her sooner, as se is clearly meant to be right there. This was made clear by me by the lead single “Epona”, which is truly one of the best Eluveitie songs that have been released in the past.
“Evocation II – Pantheon” will speak to a larger audience, if you don’t enjoy metal but you do like folk, you will definitely like this. The album goes quite fast, there is all different kinds of emotions going on and it can be a little bit confusing if you are not in the right mood for it. It takes time to listen to the album and I can only recommend while listening to it, to close your eyes. The album will take you through the Helvetian mountains back in time about 2000 years ago.