Music doesn’t always have to be taken serious, right? When I received a press release from a band named Tonttu, I couldn’t believe the amount of absurdity they put into their text. Well, that is up until I started to look deeper into the band. All band members are anonymous, playing characters, from interviews to their reviews and they all follow a strict ideology of antignomism. They call their music  “Anti-Gnomemartialindustrialneofolkmetal”. 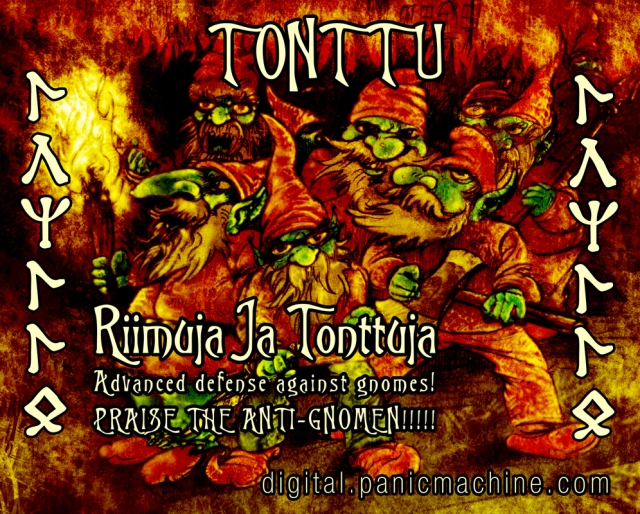 Well, in terms of providing you the necessary information to understand the context of this band, I can’t. All I know is that they’re Finnish. I have no idea where they were founded or when. Could I ask them and do some more research? Of course, but where’s the fun in that! Besides, would they even tell me? Somehow I prefer to believe they probably were founded hundreds of years ago in a hole in the ground in Finnish Karelia or something.
“What have I stumbled into now?” Is the only question I ask myself during my first listen of the album. I personally think that this album is a work of art. I mean, the concept is so great and unique in a sense. With this in mind the music is not tricky to listen to, no it’s not an easy go through album. If you try and take it serious, you might just fool yourself. But it has all the ingredients together with its concept to be a great success.
The first track immediately reminds me of Finntroll’s “Visor om Slutet”, which was an acoustic experimental album. The sounds throughout the album are very minimal. Some strings, weird instruments, electronical sounds or beats. Often there is a preacher-like voiceover. Vocals often sound purposefully sometimes like gnomes singing, on the verge of being off key, but never bothering, it’s part of the story. Shamanism seems to be one of the main inspirations this band has incorporated in their music. But not only that, “WWGS” to me sounds like the soundtrack of a war game from the nineties, such as for example “Command and Conquer”, somehow this makes me feel nostalgic and because of that the song is probably a highlight for me on the album.
There’s so much things and influences going on in the music, that it’s not the easiest album to review. There’s literally influences from every direction. But still the album sounds quite minimal. It’s more buildup as some sort of a story. It has the same structure as for example a musical would have. There are sometimes small recurring elements happening in all the tracks, such as vocals belonging to a certain character in the story. The combination of heavy riffs, minimal strings and shamanistic-like drumming give often very intriguing songs.
The language of the album is Finnish, some parts of songs and one entire song are also in German language. The band has translated all the lyrics to English though, to understand the story you don’t necessarily have to understand the lyrics or language even. A lot of the atmosphere is already incorporated in the music: war-like sounds, marching, the voice of a leader etc. You understand the point of the album just by listening to the buildups and suspense.
“Riimuja Ja Tonttuja” as well as all the previous albums are surely compelling to listen to. You will not find the greatest musicians on this band, but certainly the most creative ones. The production of the album is quite nice, the album is well balanced-out, all elements, however small they are, are very audible and it makes things more easy to listen to. The whole idea around the band is just in general really hilarious and heartwarming. I can only recommend checking out this band, if you are in the need for something beyond the ordinary.
Something that makes me curious though is what the band would sound like live and how their act would be like? Wouldn’t it be amazing if their performance was as conceptual as their music? 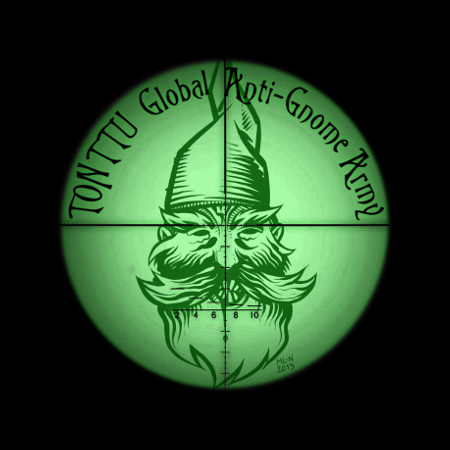