I have virtually no idea who sent me this EP. A package arrived with some promos, normally I ignore those packages that come from an unknown sender, but this time the package contained some Finnish promos. I do always say that I support the local scene, so I would be a hypocrite if I didn’t write a review about these. One of the promos in this mysterious package is the self-titled EP of a band called Dystocracy. Dystocracy, founded in 2016 in Lempäälä, combine the sounds of modern heavy metal with traditional British and German metal. 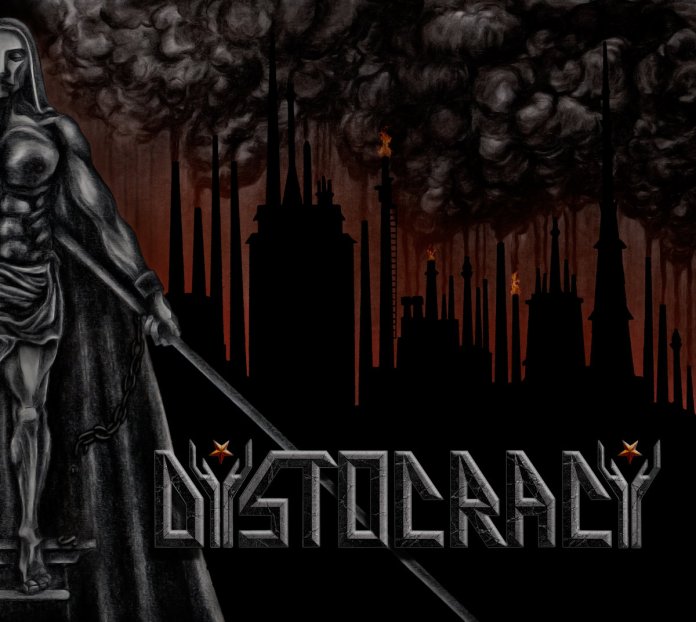 The EP starts off with a speech from Bezmenov (ex-KGB) on demoralization in America. If the title didn’t give away yet what the song is about, then that speech possibly could. The song is titled “Dachau,” which if you’re not a history buff, might not ring any bell to you anymore. Dachau was basically the first of the Nazi concentration camps in Germany. Its purpose was enlarged to include forced labor, and eventually, the imprisonment of Jews. The prisoners lived in constant fear of brutal treatment and terror detention including standing cells, floggings, tree or pole hanging and standing at attention for extremely long periods. Concentration camps solely had two purposes: to demoralize and dehumanize. This demoralization was accomplished by the extremely regimental daily routine of the camp. Deviating from this routine, often resulted in death or torture. The inhabitants of the concentration camp only faces two choices of what to do with their life: either you work, or you die. So had you been wondering what the speech of Bezmenov is doing there, well that’s where they interconnect.

It is only after my mind getting triggered and looking for a complete puzzle, that I discover the band has published manifests about all of their songs. Now I won’t go through every song as detailed as above anymore, but it’s definitely an interesting read.

Dystocracy have a great balance of songs on their EP. In my opinion, these four tracks show the great potential of the band. They have a generic heavy metal music style, that most metalheads would love to listen to. The songs sound tight and heavy. And musically everything seems to be on point. The EP is filled with big riffs, high pitched vocals and power across its 4 tracks. Highlight of the EP for me personally is “Thousand Fiery Lashes.”

While every single sound is clean, neat and natural, they could benefit from balancing out everything better. The production is in general okay for a debut EP, but needs some improvements for the next one. But never mind the production, the EP shows what the band truly has to offer us and I’m sure we can be excited for any future releases, if you like to listen to modern heavy metal, then this band is definitely checking into. Because if the band continues growing and going to the right path, they might just become your new favorite heavy metal band in the future.

REVIEW: Lord of the Lost – EP: The Heartbeat of the Devil