Steve Maher is an award winning visual and relational artist from Limerick, Ireland based in Helsinki, Finland and working throughout Europe, Russia and North America. He is an Independent researcher, writer, Inventor, Tolkien scholar, curator and artist.

Maher works across a broad range of topics, at the core of Maher’s practice is the exploration of cultural artifacts and rituals. In this mindset, Maher invented the Heavy Metal Detector.
“Heavy Metal Detector” is a cross-between a walk, workshop and a performance. Using customised metal detectors that have been hacked to play pre-recorded Heavy Metal music, Maher leads tours with the detectors. We sat down with Steve Maher to have a chat with him about his “Heavy Metal Detector”.
Hi Steve! Thank you so much for making time for us to chat a little bit more about your very inspiring artwork “Heavy Metal Detector”. Now let’s dive into the topic immediately. How did you come up with the idea of the “Heavy Metal Detector”?
Steve Maher I was working on proposals for different open call projects, I had an idea called Heavy Metal Elevator 2014, which comprised of a audio track sample that was triggered by infrared detector inside and elevator. Every time the door opened and people where standing there, a loud track would play. I had this featured at an exhibition called Incubarte 14 in Valencia in Spain. To this day I am not sure if they even displayed the art work properly. It was very difficult to get my materials back from them afterwards, no-one answering emails. From what I gather, they went through a restructuring during the festival. Feeling a little bit irritated by the whole thing I shelved the project for a little while.
I saw an opportunity for a calendar of event sin Maunula called M-Cult. I rethought the structure of the project and how to make it more participatory as opposed to installation based. Then the name hit me, it seemed obvious. I quickly researched if anyone had made the same thing. They hadn’t, but those are often the best ideas, so I followed that gut feeling and developed the project.
What has been your most important goal to reach with Heavy Metal Detector?

Steve Maher To bridge the gap between so called serious art events and another form of created media that could have, I believe, a wider sphere of appreciation.

You mentioned “Heavy Metal Detector” is a participatory project, in fact it is a walking tour. What can visitors except from taking a tour with the Heavy Metal Detector?
Steve Maher They can expect to get a good healthy half hour walk, while listening to a selection of locally sourced metal and hard rock music. They can expect to interact with their environment through a new mode of sensory input, facilitated by the customised metal detectors.

So more specifically about the tour, does the detector connect a specific location to a specific music piece? Or is the music played randomly?

Steve Maher The music featured on the detectors is practically a playlist, as the user interfaces with the detector, detecting metal in the environment, a teensy 3.5 micro-controller affects the mute state of a streaming playlist. It’s randomized by the degree at which the participant detects metal.

You made an artwork about heavy metal and the hard rock scene in Helsinki. How do you mark yourself in the scene? Would you say that you are a part of Helsinki’s metal community yourself?
Steve Maher Only through the project really, I have met some amazing bands, but I am by no means a competent musician which is a big part of the scene. I do enjoy listening to metal, but it is not my main musical focus. I had a hardcore-punk-rock stage, which followed my pop-punk stage. There are a lot of similarities between those communities, even though the are quite distinct.
So you’re not actively taking part in the scene. Are you  now more active than you used to be, before the project? Are you still in touch with the bands that were participating?
Steve Maher I keep in touch with the bands as much as possible. Honestly I spend so much time reaching out to scenes in the different cities that I bring the project to, that it is not as much a focus as I would like. I have attended shows, both as a way to meet musicians for the project and to have a good evening out.
You say that you are reaching out to the scenes in different cities that you bring the project to. How do you find these bands, is it easy to get into the scene? How do the bands react on the artwork?
Steve Maher As it was when I used to play music, social media is the primary manner in which gigs and events are organised. Where once it was through things like MySpace or Thumped, now it is through direct email contact or via Facebook pages.
Generally I have found that most of the bands are really adventurous they either think it’s really funny or really interesting or ideally both. I have never had a band disappointed as far as I know, I am very transparent about the goals of the project which helps. Sometimes there is the obstacle of explaining what the hell it is all about, but I am getting better at that the more I do it.
What bands have you been working with on this project?
Steve Maher I have worked with over 50 different bands since the project began. From scenes in Moscow, Helsinki, Eindhoven, Amsterdam,Valencia, Shefield, Derbyshire, Kajaani, Lappenranta, Seinäjoki etc.
Their genres represent the widest range of sub genres within metal, some I had never even heard of before. Bands range from professional to semi-professional to young musicians starting up for the first time.
How did people react on “Heavy Metal Detector”?
Steve Maher They laugh or dance or look really serious. It depends on them really.
What about the bands? How did they react on the end result?
Steve Maher Happily I sincerely hope, hard to know what everyone is thinking to be honest, but when I have gotten direct feedback it has been positive.
You mentioned you work with professionals, as well as semi-professionals and young talents. It is great that you are giving every kind of band a chance, especially young musicians starting up for the first time. It’s a tough scene nowadays to gain any visibility. What do you think the problem is that these bands experience to get more visibility and promotion, ultimately resulting in them making it through as a band?
Steve Maher I believe that today we face a really broad and eclectic range of music. While this is great, in that it means there are a broader range of experiences. The traditional choice of limited experiences that maybe I experienced in my youth is disappearing.
There is less of desire to seek out something unique or to embrace a subculture like in the second half of the last century. Back then you had to seek out the unique, today young people have literally everything offered on a plate, which means in the end they greet everything the same, it all levels out. 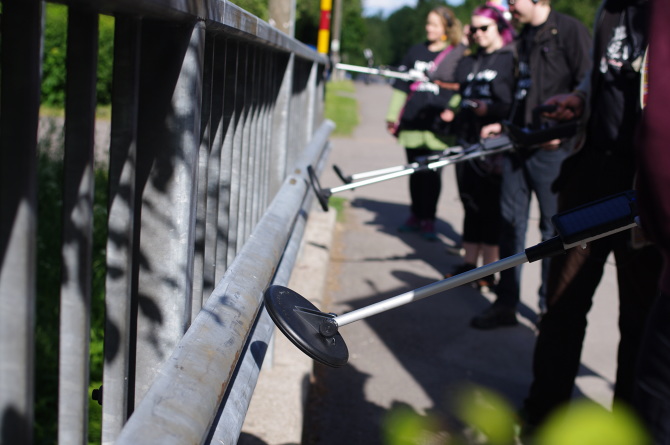 I can definitely agree with that. The music scene has changed so much over the years. Do you think there is some sort of a solution to this problem?
Steve Maher I don’t know if it is a problem. I used to believe, growing up,  that everything was for the scene and its legacy. Now I am not sure if it was just a condition of tribalism that the anxiety of society placed me in. The anxiety that youth experience to day, I reckon, is a lot different in the way it manifests.
The biggest change in music over the years has been the rise of the internet. How do you think it affects the scene nowadays?
Definitely, I’d link into what I just said in that having the whole world at one’s finger tips has very much changed how we listen to music but also how we reach out for it. I sort of feel I cherished music more when I had to hunt for it. It had more of a value for me. I think is a big reason why we see a resurgence in solid media, music is incredibly connected to objects, it is after all a tangible physical experience.
I’m sure there is still tons of people out there, who would like to experience the “Heavy Metal Detector”! Are you continuing with the project? Is there any other dates and locations that we can use the Heavy Metal Detector ourselves?
Yes, I am just back from Abandon Normal Devices 2017 in Sheffield, in 5 days I head off to Amsterdam to the famous Melkweg venue and finally this year in November, I will return to the UK to a place called Bolsover to do the project in a Castle.
Thank you for your time Steve! But before we wrap this up. What about your future plans. Is there any other projects you are currently working on that we should look out for?
I am currently working on exploring the use of Tolkien’s Quenya elvish Language in Finland. I am just today moving into a new studio and I am working on a project called Post-Modern Paranormal Investigation.
Links
https://www.facebook.com/heavymetaldetector2016/
http://www.stevemaher.net/
https://www.facebook.com/stevemaherartist/

Interview with Arion — “Arion can do pretty much what they want, there are no boundaries.”

Interview with Evil Drive — “We are on the same page.”

Interview with Ephemerald – “Every song that I wrote for the album hides behind real stories, memories, and feelings.”

Interview with Arion — “Arion can do pretty much what they...

Interview with Pihka is My Name — “Nobody is just a...

ABOUT US
Tuonela Magazine is your number one source for heavy metal and rock music in Finland.
Contact us: tuonelamagazine@gmail.com
FOLLOW US
© © Tuonela Magazine, 2021