I grew up listening to mostly progressive rock, it’s probably not a surprise that while growing up progressive metal offered that little something extra that prog rock didn’t have. NE OBLIVISCARIS in that matter is a really unique band. So when it was announced that they would play in Nosturi on April 12th, 2018, I most definitely wanted to be a part of that. NE OBLIVISCARIS released their new album “Urn” in October and it was a killer of an album. Check out the gallery here.

Unfortunately nowadays going to concerts can be a little bit tricky with my job, so I was too late to see the support bands VIRVUM and ALLEGAEON. A shame, because I actually really like ALLEGAEON, and I was looking forward to seeing them play live. VIRVUM was new to me, but it seems like it’s something that I also could enjoy listening to. But mark my words, someday I’ll see both bands live, and then I’ll write an extensive review in order to make up for missing out on them. I entered Nosturi when ALLEGAEON was playing the last notes of the last song on their set. From the 20 seconds I experienced, it seemed like everyone had a blast out there. I saw a happy, excited audience, warmed up for the next round.

When it comes to progressive metal, I always think it can either be top-notch performances or the kind where you start spacing out and think about if you should have done the dishes before heading out to this gig. Sometimes progressive metal can be a mess live. Especially when it comes to the kind of music NE OBLIVISCARIS is playing. Their music is so complex and so tight on the albums, that I was really worried that it wouldn’t be quite living up to my expectations. I had never seen the band live before, so I literally had no clue.

NE OBLIVISCARIS came on stage and opened up with “Libera (Part 1): Saturnine Spheres.” Two seconds in and I realized that my worries were for nothing. “Libera (Part 1): Saturnine Spheres” happens to be one of my favorite progressive metal songs. The song starts of quite soft and then takes you on a power trip, blows you away basically. The song live, works even better. The intricate rhythms, powerful guitars, surprising melodies, everything just fits. The song itself takes care of an enormous buildup, which is why it isn’t surprising they picked out this song as the one that needs to start off the evening. 2 minutes in the song and vocalist Xenoyr comes on stage. The contrast between Xenoyr and Tim Charles (who takes care of the clean vocals and violin) is enormous. Tim Charles is a very engaging, charismatic personality on stage. The guy looks genuinely happy and constantly looks like he’s having a blast. He talks to the crowd, he smiles a lot. Xenoyr is quite the opposite, he is more of some sort of ominous presence on stage, maybe he doesn’t engage that much with the audience, but I think that’s some sort of the magic of his character. He doesn’t need to, it’s part of it.

“And Plague Flowers the Kaleidoscope” is the next song in the setlist. In this intro, the combination of violin with the flamenco-styled guitar is very striking and refreshing, so it was great to witness live. In general, in this song, it becomes clear how much of a talented violinist Tim Charles really is. I play violin myself and I really don’t understand how he can basically multitask the whole time, without seeming exhausted, he just goes on throughout the whole gig with the same energy and attitude, whether it’s when he is taking a break and headbanging on stage, playing violin, or singing. The song continues in “Intra Venus”, which has a beautiful acoustic intro, which was played very smoothly. The bass line during the intro is a very interesting one, it is during this bass line that I realize bassist Martino Garattoni is a great addition to the band’s lineup. He seems to play everything smoothly and has kind of a jazzy feel to his style, which fits in perfectly with the band’s music. The songs continue the right way. 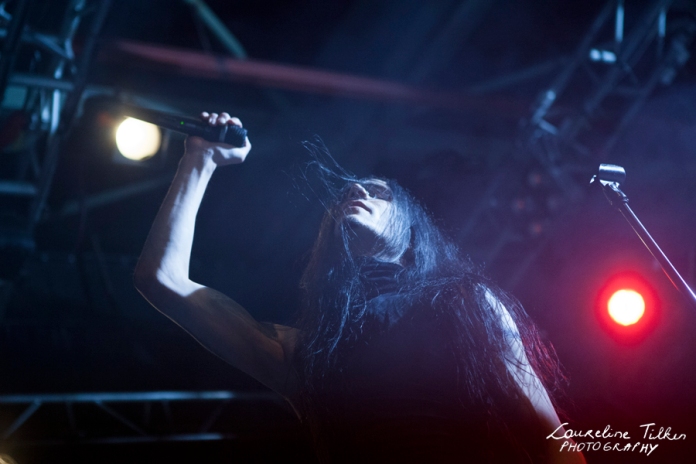 On two songs “Eyrie” and “Urn (Part II): As Embers Dance in Our Eyes” Natalija May joins on violin. Because why would one violin be ever enough? During “Eyrie” that means there is some sort of a magical moment when May and Charles play together. It’s not a surprise to me to hear that May is Charles’ fiancee, you could see that they have been playing together quite a lot. The band leaves the stage and the audience is really excited. After such a great show, of course we don’t want this to end, so yes, NE OBLIVISCARIS came back for us to play some more for us. The show ended with “Devour Me, Colossus part 1 and 2.”

In general, I have to say that the intricacy of this band’s composition is just beyond anything possible to imagine. There are so many layers of delicate, fragile melodies. Never have I heard so many intricate things happening at the same time, so many modulations, so many tempo changes in one song. It goes without saying that the band “only” performed 9 songs, all of their songs are really long in length, but I have to say that while it’s the case with many progressive metal bands that you kind of start spacing out, that doesn’t happen with NE OBLIVISCARIS. I paid attention from the first up until the last minute and it left me with a feeling of deep happiness. I really was amazed by how tight their playing is. The sound was good, the only thing bad I can really say is that sometimes the lighting was very blinding. The audience had a lot of fun, were singing or grunting along, headbanging and just seemed genuinely happy to see NE OBLIVISCARIS. The only thing that really disappointed me was that the merch booth didn’t accept cards, a surprise in Finland, one that I didn’t encounter before, so I didn’t get any goodies from there either. You can imagine that if that is my only disappointment of the evening, it must have been a great night. And sure it was. Let’s hope these Aussies will soon come back to play us even more songs! 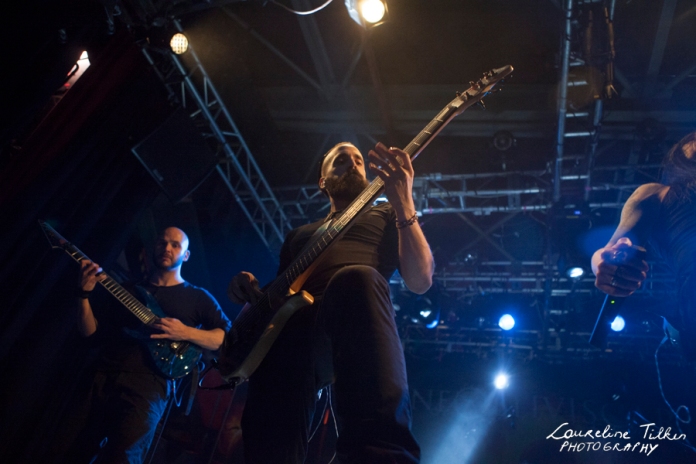 What to expect at SaariHelvetti 2021

ABOUT US
Tuonela Magazine is your number one source for heavy metal and rock music in Finland.
Contact us: tuonelamagazine@gmail.com
FOLLOW US
© 2021 Tuonela Magazine. All rights reserved.
×