Helsingin Tekniikan Opiskelijat, a student association of Helsinki University, annually organizes Valurauta. This year’s Valurauta gave the opportunity to three local bands to play at the legendary venue The Circus at Helsinki: Everfrost, Astralion and Edge of Haze.
I’m writing this now as the temperatures have gone a lot below zero again. You would think this has to do something with a band called Everfrost, who ironically were asked to open up the concert to warm up the crowd for the coming acts. Everfrost, a Finnish symphonic metal band often incorporate Japanese anime and manga influences into both their visuals and their songs. They do this, without tapping too much into Visual Kei influences or even Japanese rock and metal bands, which makes them kind of unique in their genre – even their cover of “Kishi Koushinkyoku” from the anime Knights of Sidonia, still is Everfrost! 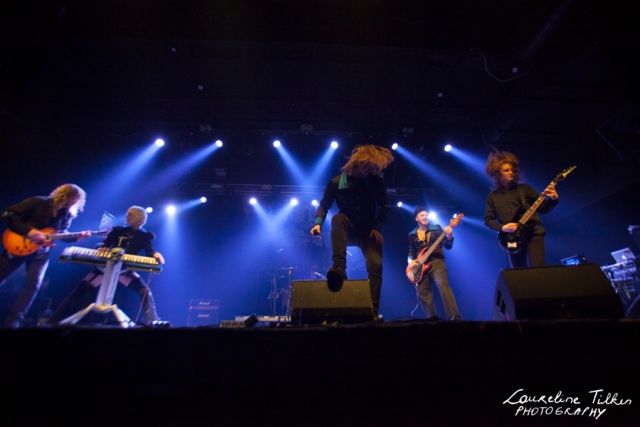 When visiting concerts of smaller bands, it’s always a bit tricky, cause you are not always familiar with their work. I am though a bit familiar with Everfrost‘s songs, but yet had to see them perform live. Their music, driven by Benjamin Connelly‘s keyboards, offers us songs we remember, thus catchy, complex, heavy riffs, intricate keyboard solos and energetic, powerful vocals.

Everfrost kicked off their gig with “The Lonesome Prince”. From the start it’s clear that the band has been looking forward to this gig, after all not many bands can say that they performed at The Circus. Unfortunately, the concert stayed in the university’s atmospheres and was not that well promoted outside of it. I’m guessing though that with a quick head count there were about 60 people. And even though that’s a huge turnout for these bands, a venue such as The Circus, will not even look half-full when there’s 200 people attending. Perception, baby. But because of that, you could wonder if the band would find it awkward to perform in a setting like this. Well, let me tell you, it certainly wasn’t an issue! Sure, the gigantic stage may have felt a bit unfamiliar to the band at first, but as they grew into their setlist they became more loose and got used to it rather quickly. Vocalist Mikael Salo knows how to target his audience and knows how to make them participate with the songs, even though the people who didn’t come for Everfrost seemed like they were enjoying the show. But on a song like “Cold Night Remedy”, which is one of my personal favorite ones of the band, it is not a big surprise that the energy amongst the crowd was also great. “Cold Night Remedy” is an interesting song, it might just be one of the only Finnish songs that offers some perspective to the history of sauna in Finland. “Die Young”, a cover from pop star Ke$ha was a new addition to the setlist. The band had never played it live before and they completely appropriated the song. “Die Young” a brilliant cover, the song gives a break from the more complex songs, it’s short, to the point and really catchy. Let’s face it, in general I’m not a big fan of pop music, but they made me forget the original version up to the point that it’s been stuck in my head all day long. “Clockwork Wilderness” featured guest vocalist Sami Korpikoski (Blackment). I am not familiar with his work, but he seems to be a talented vocalist and his growls matched up really nicely with Salo‘s clean vocals. “Clockwork Wilderness” marked the end of the set. But luckily last is not least and the band came back on stage to play their encore “Three Tier Terror”. 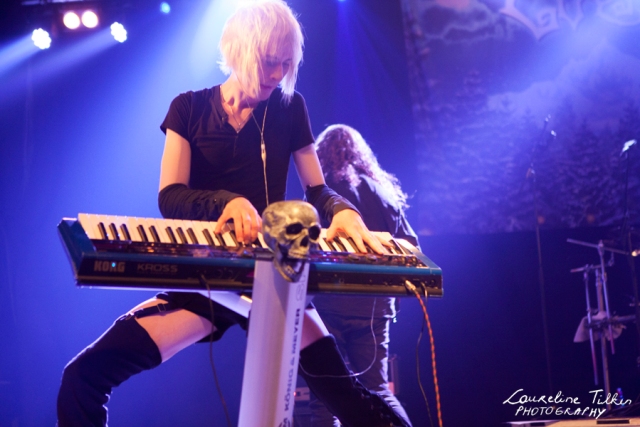 In general this band has a unique sound in power metal and have very talented musicians in their midst. In terms of stage presence Benjamin Connely outshines the rest, with his unconventional style and energy while playing keyboards. Joonas Salminen, plays a tight and coherent set of drums and moreover has a great attitude while performing. The rest of the band, however could benefit from a bit more practice in this matter. It is very noticeable that the band has a lot of potential to grow in this aspect, eg. Mikael Salo engages a lot with the audience, but in this matter he sometimes lacks to engage with his fellow bandmates. If he engages with his peers with the same level of enthusiasm that uses to entertain and to grasp the audience’s attention, he will grow from a good performer to an outstanding one. However, this is only a minor issue which can easily be solved by practice and playing more shows! Luckily the band is not stiff, they move, mosh, have fun together and that’s super important. It’d just give them that little bit of extra oomph and chemistry! What was also nice to see was the custom-made matching outfits, which provided that little extra touch.

Everfrost is on their way to do great things, hopefully in the near future. If they keep up, they can easily earn their place in music business and benefit from it. This is a band to follow, mark my words. This was clear by their tight, energetic show.

​
Next act is, Astralion. The melodic power metal band was founded in 2011. I have seen their name popping up quite some times, but never had the chance to take a deeper look into their music or attend their shows, up until now.

Now what can I say? I regretted the time I wasted not knowing this band. They pleasantly surprised me. One of my dear friends is always saying that in his opinion power metal as it once used to be, is dead. It died around 2006. To be truth, most power metal bands did loose their touch somewhere around 2010. Luckily, there’s an entire generation of new young blood on its way, such as Arion, Everfrost and apparently so Astralion!

The band started of their set with “Nightmeres Never Give Up” a song that already caught my attention. They have a very refreshing sound. The vocals of Ian E. Highhill, fit very well with the sound of the band. Often their music reminds me a bit of old Stratovarius, but a bit more influenced by eighties pop music in a way, especially in a song like “At The Edge Of The World” that becomes clear. Their songs are thus catchy and you certainly remember them at the end of the show – even if you didn’t hear their music before like me. Songs that I remembered from the show were “Black Adder”, “Be Careful What You Wish For”, “At The Edge Of The World” and the last song of the evening “Mysterious & Victorious”. Those were also my personal highlights.

Their stage energy, especially the interaction between guitarists Hank J. Newman and Manuel Martinez, was strong and in my eyes they really made a lasting impression. I can also only recommend to go check this band out if you ever have the chance. Their music is really catchy, their sound is really powerful, but yet refreshing and they really seem to professionals. You will not regret.
Setlist

Next in line was Edge of Haze, unfortunately for me the evening got a bit too late and while I had wanted to see this band as I had heard about them beforehand, was able to check out some of their music and actually liked their songs, my alarm clock was waiting for me to wake me up at 7 am. So Edge of Haze, if you would be reading this, don’t worry. One day I will make up for this! Contact our magazine, we’d love to one day cover your show! All-in-all a great evening, with an unfortunate ending of me leaving way too soon, but we can blame that on the economy, as we can with everything else!

By Laureline Tilkin 3 weeks ago

By David Araneda 4 weeks ago

By Laureline Tilkin 1 month ago

By Laureline Tilkin 3 months ago